Merry Xmas! Latest news and a year in review!

Merry Xmas everybody.  Just wanted to put a few words together to wrap up the latest ongoings of everyone involved (or once involved) in the Boutique Empire family.

Starting with Guilty About Girls who have just arisen from a productive hiatus to deliver two new songs, the latest of which was singled out by Alan Cross on his music blog.  Once again Jordy Birch is proving he is among Canada's finest pop song craftsmen!  Have a listen to his blistering new single The Boys in the Band.


Old friends Sex With Strangers have just released their fifth album Behaviors.  The first video from the new album, once again produced by the brilliant folks of BKS Crew is called Times Electric.  Check out the video below for their new sound and style.  They seem to be gathering a lot of press with this release and we wish them all a great success.


Combine the Victorious has taken the inspiration from their first European tour to begin writing and recording their third full length.  Scheduled for a spring 2013 release, the duo plans to return to Europe next year for an extended tour in its support.   Their new EP, Crumbling Hearts, indicates the tone of their new material, some of which may appear on the full length.  Vinyl pressing is being sourced out as well, with cover art to be commissioned from Robert Edmonds.


Isabelle Dunlop has had several very successful pop up shops during 2012 which has spurred on the idea of setting up a permanent shop for her designs in the new year.  It seems her wool scarves and shawls are becoming more popular each season.  Stay tuned for more news.

Robert Edmonds, the man behind the images of all the Boutique Empire releases, is currently planning expositions for the new year.  We are discussing many ideas of how to make each series unique and exciting.  Once again we'll be offering more information as we near the time to reveal his works.

Vince Tuckwood, our resident author, not only released his Escalation novel this year but has been hard at work on a dualistic music album as well.  He has been revealing certain works from the sparse side of the album which show dramatic artistic leaps from anything he's done before.  Have a listen to some of his latest works on his reverbnation page.

Though not officially a member of the Boutique Empire collective (yet) The Population Drops have quietly started to amass attention around their first four song collection.  More songs are being recorded in January and hopefully a several more live performances will be scheduled to showcase this remarkable new band and their unique style.   Check out Enough from their first EP.

In closing, if we're very lucky we should also hear some new music from the elusive Gilles Zolty in the 2013.  He's been busy working away in Saskatchewan this past year, but there have been rumours of new works that might escape from his private studio into the world.  At very least we hope he can make his way out to Vancouver for another live performance!

Here's hoping all of you will have a happy holiday season, and though 2012 has been a challenging year we are all looking forward to the new year and the opportunity our new works shall bring.

Thanks for reading, be well and merry xmas. 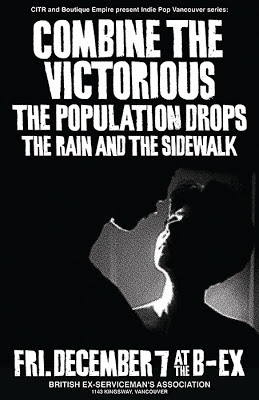