Author/musician Vince Tuckwood has just released his brand new album Turquoise Cyan Sapphire.   As a long time collaborator and contributor to the Boutique Empire team we are pleased to share it with you.   A strong move forward with his writing and performing, Turquoise Cyan Sapphire offers an update on his former music and sees his production step up on all sides.  As he put it in his own blog, these songs represent the closest he feels comfortable to playing traditional Blues bases songs.  Thus the blue tinged title to the work!

Vince has even enlisted his daughter on trumpet on a couple of the songs  making this release the first Tuckwood multigenerational album.  Have a listen for yourself, and of course if you enjoy it please feel free to purchase a copy to encourage more music from Vince in the future!

New Music: Caught Up To You

Combine the Victorious has uploaded another of their new tracks from the forthcoming Autonomous album: Caught Up To You.

Produced, engineered and mixed by Henning
Recorded at Boutique empire studio
Mixed at The Armoury Studios
Mastered by Craig Waddell at Gotham City


Read the story behind the lyrics on Victorious Combinations

Records in My Life: Walter TV

Northern Transmissions and Boutique Empire are proud to present another episode of Records in My Life, this episode features Simon and Pierce from the band Walter TV.

This was a really fun interview to film, the two band members were cracking jokes and setting each other up for a humourous time.  Check it out, and if you enjoy this one, please have a look at the others in the series. 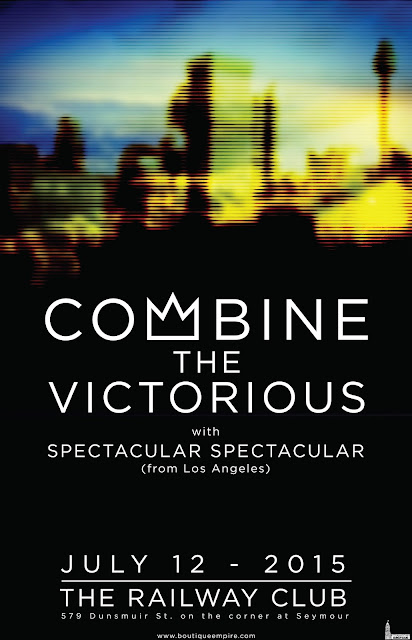 This Sunday night, Combine the Victorious will be performing an entirely new set of music featuring all the songs from their forthcoming full length, Autonomous.  They are sharing the evening with Los Angeles band Spectacular Spectacular, who are currently on their N. American tour.

Thanks to Robert Edmonds for the excellent poster for the event.

Real Life Turns Me On -Combine the Victorious

New from Combine the Victorious, "Real Life Turns Me On".    The first track from their upcoming release Autonomous.

The Population Drops on sale today!


The debut album from The Population Drops goes on sale today, worldwide.  Celebrate Canada Day with a new Canadian band, and pick up your copy of Way Down right now!


Posted by Boutique Empire at 9:34 AM 0 comments