Back on October first Headlong Hearts held their album release party for "What We Call Forever" at Hipposonic Studio here in Vancouver, Canada. The show was a great success, sold out and warmly received and the band made an audio recording of the night. I have been going through the songs and picking the best tracks for the night and mixing the multitrack audio we recorded that evening.

This song, Canadian Shield, is not available on the debut album and is likely to be the first new single Headlong Hearts records for the next release. Fiddler Hugh Ellenwood wrote this one and the band as quickly adopted it into their live sets as it has proven to be a crowd pleaser. I hope you find it fun as well!

We Are Not Alone - video

We Are Not Alone by Combine the Victorious.

Lyrics and music by Henning, Dunlop

Email ThisBlogThis!Share to TwitterShare to FacebookShare to Pinterest
Labels: alternative music, animals, Canadian band, Combine the Victorious, I Can Feel It, nature, vancouver band, video, We Are Not Alone video

The band once known as Farmteam is no more. They are now called Headlong Hearts. Still consisting of Matt Kennedy, Brad Gillard, Hugh Ellenwood, Matt Brain and Mark Henning, Headlong Hearts are about to begin releasing their new music to the world! The fist stage consists of a three song video trilogy filmed live at the Havana Theatre on January 30th 2022. Below is the first video: Down In History.

Directed, edited and audio by HENNING

Everything you see and hear was performed by Headlong Hearts on January 30 2022. 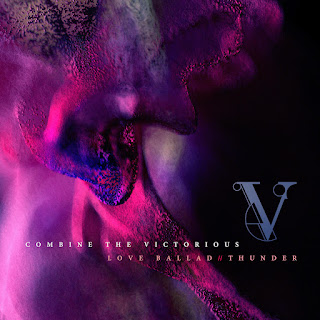 For the first time, Combine the Victorious has released a new single in partnership with Thorvald Records from Los Angeles, California.  On Feb 11 2022 a double A-side featuring the songs Love Ballad and Thunder was released worldwide.

A massive benefit of this partnership has been the introduction to Steven R. Gilmore, graphic artist extraordinaire (he's done covers for artists such as Skinny Puppy, Grapes of Wrath, A Perfect Circle and countless others) whose art now graces our cover. The incredible image and layout is so engaging and inspiring it seems to elevate the music to new level!

In addition to the new double A side release there is also a new video for the song Love Ballad. Filmed on location at the Isabelle Dunlop Clothing Store the video is a depiction of a fairly typical day for Isabelle. She meets her customer, as portrayed by actress/model Carmel Amit, discusses designing a dress for her and then we see her go to work. The Isabelle Dunlop Clothing Store is featured throughout the video, with loving depiction of the design studio in the back of the shop.

directed, edited and audio by HENNING

Music produced by Combine the Victorious

Mixed and Boutique Empire by Henning

Posted by Boutique Empire at 9:00 AM 0 comments

Back at the beginning of June we went to the top of Queen Elizabeth part and filmed Calle Verde dancing the story of La Faena. The story involves a bull who is transported from his fields to the bullring. Here the bull encounters a bull fighter and a struggle ensues. However both parties have a change of heart.

Calle Verde is a well known flamenco dance group in Vancouver, BC, Canada. The three, Maria Avila, Michelle Harding, and Peter Mole have become a fixture of the local scene. This short film is their entrance into the 2021 Flamenco de la Isla Society of Victoria BC. It debuted on June 22nd.

Helping me with this project was Isabelle Dunlop who assisted and shot second camera. Together we filmed at 7AM in the QE Park, surrounded by a large early morning Tai Chi class and the comings and going of the Vancouver parks board. I'm very proud of this film as it presented me with many challenges and the results look great!

If you enjoyed this please check out Calle Verde as they are currently performing Friday evenings at the Havana Theatre on Commercial Drive here in Vancouver.

Chreographed and performed by Maria Avila and Michelle Harding.

I'm really excited to write about this project. Back in January when I first took over Ryan Dahle's old studio in the Song City music studio complex I began working with Johanna Sö. Johanna is a virtuoso violinists, classically trained, graduate of Carnegie Mellon, touring violinist with the West Coast Celtic band The Town Pants and now a singer songwriter.

Back in December of 2020 during the dark winter months of Covid 19 lockdowns and social isolation Johanna approached me about recording some of her music. Initially I thought it would be a violin album with one or two vocal songs. When January rolled around however she showed up at the studio with 6 complete songs and a backpocket full of other ideas. We set out with an intention to record the songs with a central focus on the violin as that was her primary instrument. However those first intentions were not even remotely as encompassing as the final record has proven to be.

Co-producing this album with me is Duane Keogh. Duane is one half of the core members to The Town Pants. I have worked with Dave and Duane on almost every The Town Pants album they've made since 1997 so Duane and I have a long history and friendship between us. With his help we approached the task of capturing Johanna's ideas.

I'm extremely proud of the work we've all done on this record. The final scope of the music is so immense and beautiful that it still makes me smile a bit when I listen to certain sections. We took 8 songs and crafted them into 8 unique journeys, all held together around the violin and Johanna's voice but each branching out with their own melodic intentions. From the more direct approach to songs like These Scares or You're Lovable, to the quirky jazzlike Purple Piano and ending with the epic 7 minute Breathe we covered a lot of ground sonically. Throughout, the playing is superb: with shout outs to the brilliant drumming of Terence F Clark and the outstanding basswork from Hugh McMillan, the vibrant cello of Cara Fox all complimenting Johanna's violin work. It would be an understatement to say the musical results are some of the best music I've ever recorded.

In the following weeks I would like to go into some detail surrounding this music, digging into the multitrack to expose some of the lush layers we created with vocals and violin stacks. There are countless exceptional auditory segments that still surprise me when I solo them up in a mix. The writing and playing on this album are great and deserve to be written about in detail!