Sex With Strangers review in Exclaim! 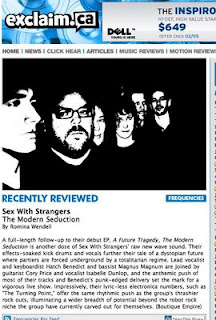 Sex With Strangers
The Modern Seduction
by Romina Wendell

A full-length follow-up to their debut EP, A Future Tragedy, The Modern Seduction is another dose of Sex With Strangers' raw new wave sound. Their effects-soaked kick drums and vocals further their tale of a dystopian future where partiers are forced underground by a totalitarian regime. Lead vocalist and keyboardist Hatch Benedict and bassist Magus Magnum are joined by guitarist Cory Price and vocalist Isabelle Dunlop, and the anthemic push of most of their tracks and Benedict's punk-edged delivery set the mark for a vigorous live show. Impressively, their lyric-less electronica numbers, such as "The Turning Point," offer the same rhythmic push as the group's thrashier rock outs, illuminating a wider breadth of potential beyond the robot rock niche the group have currently carved out for themselves. (Boutique Empire)

Posted by Boutique Empire at 1:14 PM